RAWALPINDI, Sep 19 (APP): Sen Roberta PINOTTI, Italian Minister for Defence along with her delegation called on Defence Minister, Pakistan, Khawaja Muhammad Asif here in his office on Monday.
Roberta PINOTTTI, praised Pakistan’s role in peace initiatives in the region, particularly in Afghanistan.
Minister for Defence, Khawaja Muhammad Asif highlighted that Pakistan attaches great importance to its relations with Italy. Minister mentioned that MoU on Defence cooperation with Italy ratified in 2013 will lead to greater cooperation in defence area between both the countries. Federal Minister also expressed that since Italy is an important NATO member so the military experience it has gained may be shared with Pak-Defence Forces who are fighting against the terrorism.
Minister emphasized on the need to explore the areas in the field of joint defence production and to have regular exchange of high level visits between both the countries. Minister also gave an overview regarding methodological approach of Pakistan in clamping down the terror networks under National Action Plan.
Minister said that Pakistan believes in Afghan led and Afghan owned peace process and is ready to play a positive role in the reconciliation process. Minister further mentioned that Pakistan has deployed 202,000 troops along the western border which clearly clarifies the sincere efforts of Pakistan in its campaign against the terror networks.
He also talked about the Indian ceasefire violations and their effects on Pakistan’s sincere efforts against terror networks. He further highlighted the growing imbalance between India & Pakistan’s conventional capabilities, and the ongoing Indian atrocities in Kashmir and growing intolerance towards the minorities. 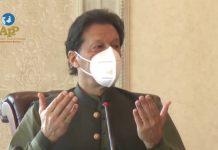 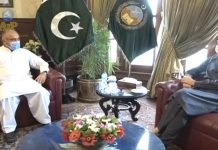 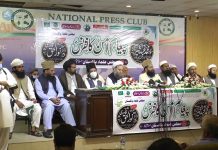