Citizens belonged to different walks of life including children, women, youngsters and elder ones reached at route of the rally much before its arrival to express their love and passion to welcome them.

Senior government officials were also present at Thokar Niaz Beg interchange of Islamabad-Lahore Motorway where from the rally entered into the city. Some Chinese citizens also joined the event at the Mall road. A group of folk dancers presented traditional dance on drumbeat on the occasion.

Flowers were showered upon participants of the rally in different parts of the city.

Responding to the emotions of the citizens, the participants of the rally waved their hands, raised slogans for Pak-China Friendship and long live Pakistan, Long Live China, they also thanked the people for their hospitality and love for China.

The rally, comprising 20 cars with 52 people, is aimed at highlighting the China-Pakistan Economic Corridor (CPEC) project and its benefits for the people of the region.

According to the authorities, the rally will pass through Punjab, Sindh and Gwadar and then they would go to Iran and from there to the UAE.

After having a night stay, the Rally will depart onward on Tuesday morning from historical Lahore Fort. APP/rnb/VNS, Lahore

Gisni, a variant of wrist wrestling, popular among youth 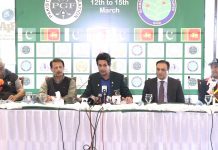