ISLAMABAD, March 27 (APP): A daylong national maritime conference on Monday called for a broad-based National Maritime Policy, modernization of navy, and expansion of diplomatic engagement with the littoral states of the Afro-Asian Ocean Region (more commonly known as Indian Ocean) for peace and security and capitalizing on the opportunities created by China-Pakistan Economic Corridor (CPEC).

A set of 25 wide-ranging policy recommendations was issued at the conclusion of the conference on “Maritime Security in the Indian Ocean: Challenges and Prospects for Pakistan”, which had been jointly
organized by Centre for Pakistan and Gulf Studies (CPGS), Konrad Adenauer Stiftung (KAS), and National Centre for Maritime Policy Research (NCMPR).
The conference, which was participated by policymakers, legislators, maritime experts and academics, further supported the idea of identifying Indian Ocean as ‘Afro-Asian Ocean’ to give a sense of ownership to the littoral states since the Ocean is bound by two continents.

The conference was held to analyze the challenges in realm of maritime security emanating from militarisation and nuclearisation of
Indian Ocean and power projection by states maintaining presence in the area, emerging alliances in the region and threats to CPEC, in addition to
non-traditional challenges like terrorism, piracy, food security and
environmental concerns.

National Security Adviser Lt Gen (R) Nasser Janjua, while underscoring the importance of maritime security, in his keynote said, “Inter-state tensions in the region and significant investments in blue water navies by countries like India have brought oceans into focus as sensitive security space.”

He said the vision of ‘Asia’s century’ was under stress because “security architecture and strategic stability of the region has come
under stress”. In this regard, he pointed towards Indo-US logistics exchange agreement, through which he said, “India and US have carved out space to pre-position themselves on this ocean. India, he said, was being propped up as a counter-weight to China through geo-political, geo-economic and geo-military moves.

The conference recommendations underscored the importance of
overcoming national ‘sea-blindness’, because of which maritime issues have remained neglected in the national priorities, and developing a culture of ‘sea-positivity’.

Unveiling the recommendations of the conference, President CPGS Sehar Kamran said, “Maritime Security is a pivotal aspect of Pakistan’s national
security, and must be acknowledged as such. A comprehensive and long-term maritime security policy with a futuristic approach based on projected
requirements for the coming decades in both civilian and military maritime
sectors is the need of time. Furthermore the issue identified with the
nomenclature be resolved and the Ocean should be renamed as the Afro-Asian Ocean.”

Senator Sehar Kamran said fulfillment of the vision of ‘Asian Century’ needs a focus on 3Cs Connectivity, Cooperation and Communication.
She specially thanked PPP co-Chair and former President Asif Ali Zardari for helping in initiation of CPEC and said it underscores how we can contribute to achievement of national interest in a non-partisan manner.

It was suggested that the existing National Maritime Policy should be reviewed to make it more inclusive and forward looking so that it could address trade, economic, environmental and security elements for the protection and projection of Pakistan’s maritime interests. Creation of National Maritime Authority, allocation of necessary resources, research, expansion/development and establishment of new ports particularly along the Makran Coast were also proposed.

The recommendations placed special emphasis on development and modernization of Pakistan Navy for being the guardians of the maritime boundaries. “Pakistan should increase and modernize its naval fleet, and pursue technological advancements in sea-based deterrents to ensure an assured second strike capability, especially in the context of the growing threats in the AAOR by our belligerent neighbor.”
Rear Admiral Mukhtar Jadoon, former additional secretary Ministry of Defense, cautioned that “The available resources are inadequate to meet the maritime security dictates.” Importantly the conference recommended greater diplomatic engagement with littoral states in Afro-Asian Ocean Region to promote mutual trust and cooperation in development of the region, besides enhancing Pakistan’s access to African markets. It called for a review of UN Resolution 2832 that declares this Ocean as Zone of Peace to address the concerns of littoral states including its nuclearization. “Pakistan must take the initiative in strongly opposing the increased  instability produced by the introduction of nuclear weapons by India” in the Ocean.

It was proposed that India may also be roped into the connectivity net as it was identified as the only way forward towards promoting peace and stability in the region and ensuring the security of investments like CPEC.
Other recommendations related to promoting investments, skills development, equitable distribution of opportunities created by CPEC, and improved governance and security within Pakistan.
Former Deputy Chief of Naval Staff Vice Admiral ® Iftikhar Ahmed said: “If we have the requisite infrastructure and enabling environment at Gwadar and the region, Gwadar will surely emerge as the economic hub of the region.” He stressed that Iranian port Chahbahar poses no challenge to Gawadar and the two can compliment.
APP/Sahar/mka 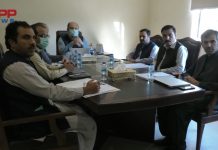 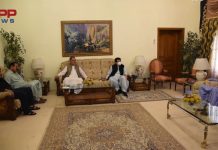 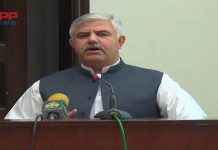