SOCHI Russia, Dec 01 (APP):  Prime Minister Shahid Khaqan Abbasi Friday stressed upon the Shanghai Cooperation Organization (SCO) member countries to fully harness the true potential they possessed, owing to vast connectivity and economic prospects and cautioned against the politicization of economic development and connectivity projects as such a myopic approach would only hold back
the collective progress.
“Today, we are witnessing a historic opportunity for the SCO to truly have a trans-continental reach.  In the coming decades,
it would emerge as an important global geopolitical and geo-economic force. Let us harness the SCO’s potential and
competencies for our mutual advantage. We stand ready to contribute to this collective endeavour.
In a statement in the meeting of the SCO Council of Heads of Government, the prime minister said after becoming a full member of the SCO, Pakistan was all set to bring more vitality in the organization as it possessed tremendous potential for
global, regional trade and economic activities.
He said the SCO held tremendous potential for connectivity, trade, energy and economic development. It could lead to
progress and prosperity of the entire region.
“With a consumer market of over 200 million people, vast business potential and a rapidly modernizing infrastructure,
Pakistan offers the SCO enormous opportunities for mutually beneficial cooperation. Pakistan’s deep historical and cultural ties,
as well as strong economic and strategic links with the SCO members, can act as an enabler in realizing the SCO’s vision,” he
added.
The prime minister said trade and economic cooperation held the key to the SCO region’s long-term stability, progress
and prosperity.
The China-Pakistan Economic Corridor (CPEC), which is the pioneering project of the Belt and Road Initiative, complements the SCO’s vision of connectivity and economic integration, he added.
He said that Pakistan wanted to see the CPEC connected to the six main trade corridors of the SCO as it would help fulfill
the long cherished aspiration for land and maritime connectivity between Europe, Central Asia, China and South Asia. Pakistan,
he added, was also pursuing projects such as CASA 1000 and TAPI Pipeline Project to promote regional energy connectivity.
Prime Minister Abbasi said the world was going through a profound transformation marked by eastward shift of the global development potential.
Coinciding with this change, he said, the SCO was creating a new imprint on the global international order. “The “Shanghai
Spirit” – as enshrined in the SCO Charter and the Treaty on long-term neighborliness, friendship and cooperation   is our guiding principle. It can help promote our shared vision of mutual trust, mutual benefit, equality, respect for cultural diversity and the
pursuit of common development,” he added.
He said the SCO should continue to contribute towards building a just and rational world order based on the UN Charter principles of respect for international law and non-interference in each other’s internal affairs.

The prime minister further said that Pakistan was fully cognizant of the threats posed by terrorism, separatism and extremism
to the regional and global economic development.
“We have lost thousands of lives, including 6,500 military and law enforcement personnel, to terrorism. Our economy has suffered losses of over $ 120 billion. This has only served to strengthen our resolve to fight terrorism. We are vigilant and will
not allow any form of militancy on our soil. Pakistan is fully committed to eliminating the evil of terrorism,” he added.
Russian Prime Minister Dmitry Medvedev, Chinese Premier Li Keqiang and other heads and representatives of the
governments were present on the occasion.
The prime minister said that Pakistan supported and would complement the efforts of SCO-RATS in the fight against
terrorism and extremism. “We support the SCO consensus that as we engage in the fight against terrorism, we must respect
the norms and principles of international law and shun double standards. Terrorism cannot be identified with any religion,
individual countries or nationalities.”
Prime Minister Abbasi said that Pakistan desired an early return of peace, stability and prosperity to its brotherly country
of Afghanistan and called for further deepening of cooperation within the new consultative format of “SCO  Afghanistan
Contact Group”.
The objective of this format should be to support Afghanistan’s efforts for a peaceful political settlement through dialogue
and combating security and terrorism threats to Afghanistan and the region, he said, adding that Pakistan would be happy to
contribute to SCO’s efforts towards building a stable and prosperous Afghanistan.
He said this year marked the 15th anniversary of the signing of the SCO’s Charter, which also held a special significance
for Pakistan and expressed pride in becoming a full member of the SCO, an organization that offered a new model of inter-state
cooperation for peace, security, connectivity and sustainable development.
The prime minister also highlighted the importance of strengthening the future SCO cooperation through improving the
regional infrastructure and enhancing connectivity by building communication networks, including roads, motorways, air,
maritime and IT links, developing multilateral trading system in sync with the WTO to pursue the shared goal of economic, trade, services and technological integration, harmonizing laws and regulations on trade facilitation, movement of merchandise,
taxation policies, customs rules and removal of tariff/non-tariff barriers as well as development of SMEs  and E-commerce, supporting efforts of SCO Business Council and SCO Interbank Association in further enhancing economic, trade and
investment cooperation, fast-tracking the establishment of the SCO Development Bank and Development Fund and creating synergies with AIIB and other financial institutions, creating legal synergy through regular dialogue between parliamentarians,
justice ministries, supreme courts and attorney generals for effective administration of justice, and Investing more in the fields
of health, tourism, education, sports, culture, people-to-people contacts and the liberalization of visa regimes.
Prime Minister Abbasi also congratulated India on becoming a full member of the SCO and felicitated China for taking
over chairmanship of the SCO. He also welcomed Tajikistan as the next host of the SCO’s Heads of Government Meeting in 2018. 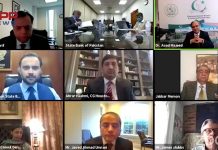 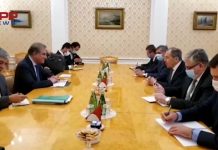 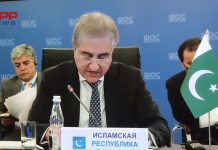