ISLAMABAD, Feb 14 (APP): Prime Minister Imran Khan Friday said success of the economic policies of his government was evident from the decreasing Current Account deficit, which indicated stability of the economy and was also acknowledged by international financial institutions.

“However, we still need to focus on enhancing exports, if we wish to increase the national growth rate,” he expressed his views while talking to media persons at the Prime Minister House.

The prime minister said a meeting to discuss challenges due to the high prices of electricity and gas would be held next week.

Imran Khan dwelt at length about the reasons leading to the current economic woes of the country. The present situation, he said, had a 10-year old history, when the governments of Pakistan Peoples Party and Pakistan Muslim League-Nawaz were in power.

He said the first year of his government was the most difficult period, as the country risked a default as it had foreign exchange reserves for two weeks only.

“We feared sanctions and host of related problems, had we failed in the payment of loan installment of 10 billion US dollars,” he added. The Pakistan Rupee parity could have peaked to Rs 200 a dollar, skyrocketing the prices of everything. “Had Saudi Arabia, the United Arab Emirates and China not helped us at that critical juncture, Pakistan would have defaulted.” The prime minister pointed to the agreements signed by the previous regimes with the private power producers and said under new contracts his government was getting wind energy at the rate of 5 US cents per unit against 24 US cents from the old power producers, showing a huge gap.

His government, he said, had also managed to cut down the circular debt to Rs 12 billion from Rs 36 billion per month.

Similarly the international gas price today was available at half the price of what Pakistan was getting, as it entered a 15-year long contract.

The provision of cheap electricity was the only way to lower the costs of electricity for export-related industries, he added.

Imran Khan said corruption, which was one of the major reasons for poverty in the developing and under-developed countries, needed to be tackled on priority. He mentioned the action taken by the Chinese government against 450 ministerial level people and said unless Pakistan remained firm in its commitment to stem the menace, it could not progress.

The prime minister answered in negative when asked whether his government intended to put any curbs on the media. It was he who suggested to former president Pervez Musharraf to allow news channels in the private sector.

He said he had a long experience of interacting with the media in Pakistan and abroad. He said just prior to his first visit to China, two leading English dailies had a lead story that he was going to Beijing to review the CPEC (China Pakistan Economic Corridor) project, which caused immense embarrassment for the government.

He said similarly his remarks about creation of jobs were distorted and only in two months 21 fake news were attributed to him by leading newspapers. He was not perturbed because of allegations on his person, but, in fact, it was causing embarrassment to the government and Pakistan.

He said respect for Pakistan had improved since his government came into power as it was working sincerely to bring about improvement in every sphere. It was the responsibility of everyone to safeguard the national interests, particularly the media persons, he added. 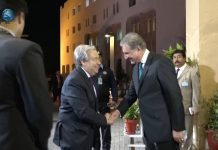 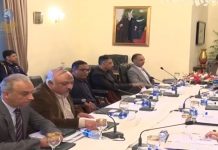 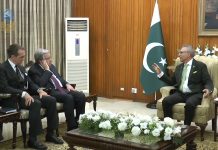